skip to main | skip to sidebar

About a year ago, a female vervet monkey escaped from her cage, and the zoo still does not have the necessary equipment to recapture her. She was pregnant at the time, and gave birth to a male who is now adolescent. Since then she has been hanging around the zoo, and conducting an affair with another male through the bars of the cage, and as a result she recently gave birth again. The whole family are doing well; in fact, they’re doing better than the monkeys who are still in the cages. 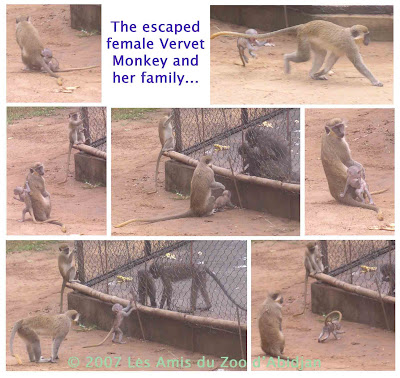 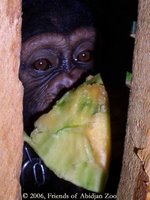 Rambo is a juvenile male chimp, thought to be about five years old, who was recently given to Abidjan zoo by a private individual. We don’t know much about Rambo’s life before coming to the zoo. His owner kept him chained up in the yard, with a heavy padlock around his neck which made the hair on his shoulders fall out. We can assume that he went through similar experiences to Fanta: witness to his mother’s death, stolen from his forest home as a baby, and sold into captivity.

Rambo’s owner didn’t want to keep him any more because he bit a child. Sadly this is an all too common story. Baby chimpanzees are cute, and friendly and playful, but as they grow up they become formidably strong and can become aggressive when they get annoyed by the way they are treated. By the time their owners don’t want them any more, they have forgotten much that they learned in the forest by their mothers’ sides, they cannot be easily reintroduced into the wild, and they are entirely dependent upon human beings.

Rambo turns out to have a very mild temperament. He is very quiet, and calm, though he enjoys playing, and he really enjoys having his back groomed. While one of the keepers spent nearly fifteen minutes cutting off the chain around his neck because the key to the padlock was lost, he appeared to understand exactly what was going on, and remained calm and docile throughout the whole operation. Once the chain was off, he galloped around the cage which was to be his new home, seeming to revel in the freedom. 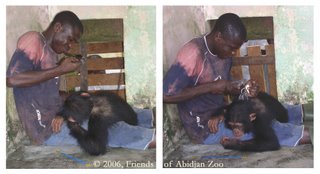 We don’t know how long Rambo was kept in captivity, we don’t know how young he was when he was captured in the forest. His personality is in marked contrast to Fanta’s; where Fanta screams for things she wants like a spoiled child, Rambo moves mournful brown eyes between you and your bag of peanuts, playing the pity card like a professional. When they were introduced to each other, they hit it off immediately, which was a beautiful confirmation of how important sociality is for chimpanzees. This social interaction and affection between chimps is something that can never be replaced by contact with human beings.

First Meeting of The Friends of Abidjan Zoo

We are delighted to announce the first meeting of The Friends of Abidjan Zoo, to be held in the "paillote", Abidjan Zoological Gardens, Williamsville, Abidjan, on Sunday 10th December 2006 at 14:00.

In order to be legally recognised as an association in Côte d’Ivoire, we must hold a General Constitutional Assembly (meeting) and do the following:

We will also be voting for one of the following logos to use on official correspondence and merchandise.

Please, if you are based in Abidjan, come along to the meeting, offer your views, your time and/or skills, and your first year’s membership!
Posted by Dot at 8:05 am 4 comments:

Fanta has been at the zoo for over six months now; when she arrived she weighed 3.5 kg, had intestinal amoeba and worms, was depressed, lonely and frightened. Now she weighs over 6 kg, and has made friends with all the zoo staff (and some of the other animals). Every day a volunteer takes Fanta out into a little patch of forest in the zoo grounds where she can play and relax, and have some social contact with someone with whom she feels safe. When she was first taken on one of these outings she quickly identified and started helping herself to some of the plants she remembers from the forest where she was born.

The plants she eats include the shoots and new leaves of Hypselodelphys, she enjoys the fruit of the strangler fig tree by the lions’ cage, she enjoys Pallisota shoots, wild yam leaves and bamboo shoots – sometimes she even refuses banana and papaya, preferring the wild food she finds in the woods. 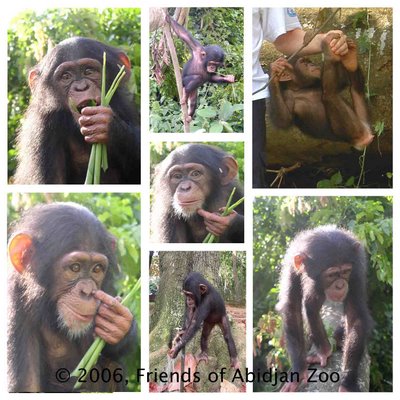 When these outings became a regular part of her daily routine, Fanta blossomed. She lost her shyness, she started to play, she made more vocalisations, and she grew bolder and more curious about her environment. These outings are wonderful for Fanta, and she enjoys them enormously, however, they cannot continue forever. There will come a time when she is no longer a baby, and her desire for independence from her ‘mother figure’ will be incompatible with her relative freedom around the zoo.

Fanta is currently kept in a bare room in the zoo, which, although it is a decent size, is so devoid of stimuli that she spends most of her time in her cardboard box in a corner. She will, at some point, be obliged to give up the freedom she has, and she will therefore need a cage specifically adapted to her needs, but one which will continue to maintain the high quality of life which she currently enjoys. Please give generously using the link in the top right of this web page, to help us provide her with the living space she needs.
Posted by Dot at 11:36 am 8 comments:

Introducing "Fanta" and the Friends of Abidjan Zoo 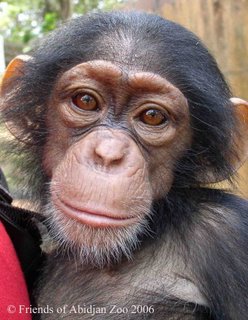 In January 2006, a baby chimpanzee was discovered in the town of Taï, a small sous-prefecture in the west Côte d’Ivoire. It is not known whether the baby was captured in Liberia or in Côte d’Ivoire, though it is likely that her mother and other members of her group were killed by the poachers who captured her, and were sold in the illegal bushmeat trade. Orphaned babies like this one are often sold as pets, once in human hands they are often badly treated and don’t live long. West African chimpanzees (Pan troglodytes verus) are an endangered species and protected by law – it is illegal to kill them, capture them, or keep them as pets.

The baby chimp was kept in captivity for approximately two months. She appeared to be poorly fed and weak and showed signs of dehydration, loss of hair, and depression. The baby is a young female, and she was christened "Fanta".

There are currently no chimpanzee sanctuaries in Côte d’Ivoire, where orphaned babies can join a group of other rescued chimps. Reintroducing Fanta back into the wild was impossible, since wild chimpanzee groups do not usually adopt unknown infants she would most likely be killed; she could also have introduced human diseases to the wild population. The only option the agents of the OIPR (Office Ivoirien des Parcs et Reserves) had was to take Fanta to Abidjan Zoo. 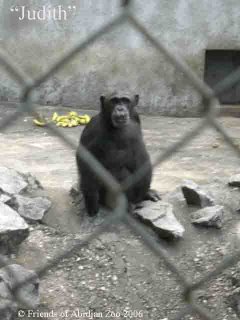 There are three other adult chimpanzees already at the zoo. They probably went through similar experiences to Fanta, being caught in the wild and kept as pets while they were young. These three individuals are the remains of two much larger groups that were decimated by disease in 2004. Fanta is too little to be housed with them as they would most likely attack her, so she is on her own for the moment.

Conditions at the zoo are far from ideal. Although the cages are of a good size, the walls and floors are bare concrete and there is no environmental enrichment. The primates are bored and lonely – some could even be called depressed. Zoo visitors throw cans, rubbish and cigarettes to the chimpanzees. The zoo director and keepers are very motivated to change things, however they lack resources and expertise. It would be easy to put up signs and fencing to stop the visitors from throwing things at the chimpanzees, but this costs money that the zoo does not have.

The chimps at the zoo do not display normal behaviour, but instead show the stereotyped pacing of unhappy prisoners. In the wild, chimpanzees live in social groups which can be very large with hundreds of members. They have complex social behaviours that play an important role in thier development and each individual’s well being. They defend a territory together and learn from each other important tasks such as nut cracking and termite fishing. They invest a lot of their time socializing in maintaining good social relations, in activities such as grooming, playing, hunting, and sharing food. All such social and environmental conditions can not be perfectly reproduced when chimpanzees find themselves in a human environment in a zoo. But with a certain understanding of wild chimpanzees, it is possible to improve the living conditions of captive chimps.

The students who work in the Taï National Park, their friends and colleagues are trying to change the dire situation of the chimpanzees of Abidjan Zoo. To this end, we have created the “Friends of Abidjan Zoo” association to work together with the zoo to improve the conditions for the animals. We want to start with Fanta, to provide a happy and secure future for her. Then we will broaden our activities to the other chimpanzees and monkeys, and the rest of the zoo.

First we need to be sure that Fanta’s immediate needs are being met. It costs only 5,000 CFA (€7.5, £5, $9,) per week to feed her properly. A visit from the vet costs approximately. 20,000 CFA (€30, £20, $27). We aim to create a stable fund with the help of internet donations and fundraising activities in Europe to secure the future of Fanta and improve the living conditions of the chimpanzees and all other animals living in the Abidjan Zoo.

In the top right hand side of this web site you can find a link to donate money to help Fanta. Any amount of money you donate will help Fanta. If you cannot donate money at this time, please bookmark this site to keep an eye on our progress, and forward our URL to friends with an interest in animal welfare. You can help give Fanta and many other animals a better life! 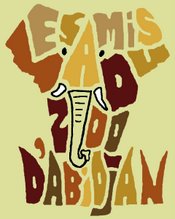 We are a group of primatologists, biologists, veterinarians and concerned lay-people from all over the world. Our aim is to raise money to improve the living conditions of the animals in Abidjan Zoo (Côte d’Ivoire, West Africa). This blog will be updated frequently with news and photographs of the baby chimpanzee Fanta, and the other animals we are helping.

Please bookmark this site, visit regularly to check on our progress, and tell your friends about us and our work. Feedback is welcome and we invite your comments, as well as your generous donations.